In this industry nothing can be certain, except bugs and taxes.

We’ve heard a lot of stories about United’s bug bounty program that was launched May 11th, 2015. It hit the news outlets with praise. The biggest twist was United’s choice of payout, which was in United miles. I could rant about United’s program, from the frequent reports of delayed patching of critical issues to the overly limited scope, but that’s for a later time.

This is about United’s choice of payout, and a strong warning for anyone wishing to participate in United’s bounty program, or any other program that doesn’t reward cash but rewards something of value that isn’t classified as a gift. You can’t avoid the taxman, and it may be more headache than it’s worth. While it might not be United’s fault that these bounty hunters were not fully informed on the tax ramifications of recieving miles, it does make the entire bounty program more interesting…. in a bad way.

TL;DR - If you’re a bug bounty hunter, and the bounty is not a cash payout, you most likely are still liable for taxes. In cash.

While sitting in a channel of former SpiderLabs friends, it was mentioned that one of their new colleagues was recently hit with a 1099-MISC from United for the bug they submitted for a substantial number. After 30 seconds of searching on twitter, it was confirmed across multiple people, and seems everyone was a bit taken back as to the valuation of a mile. 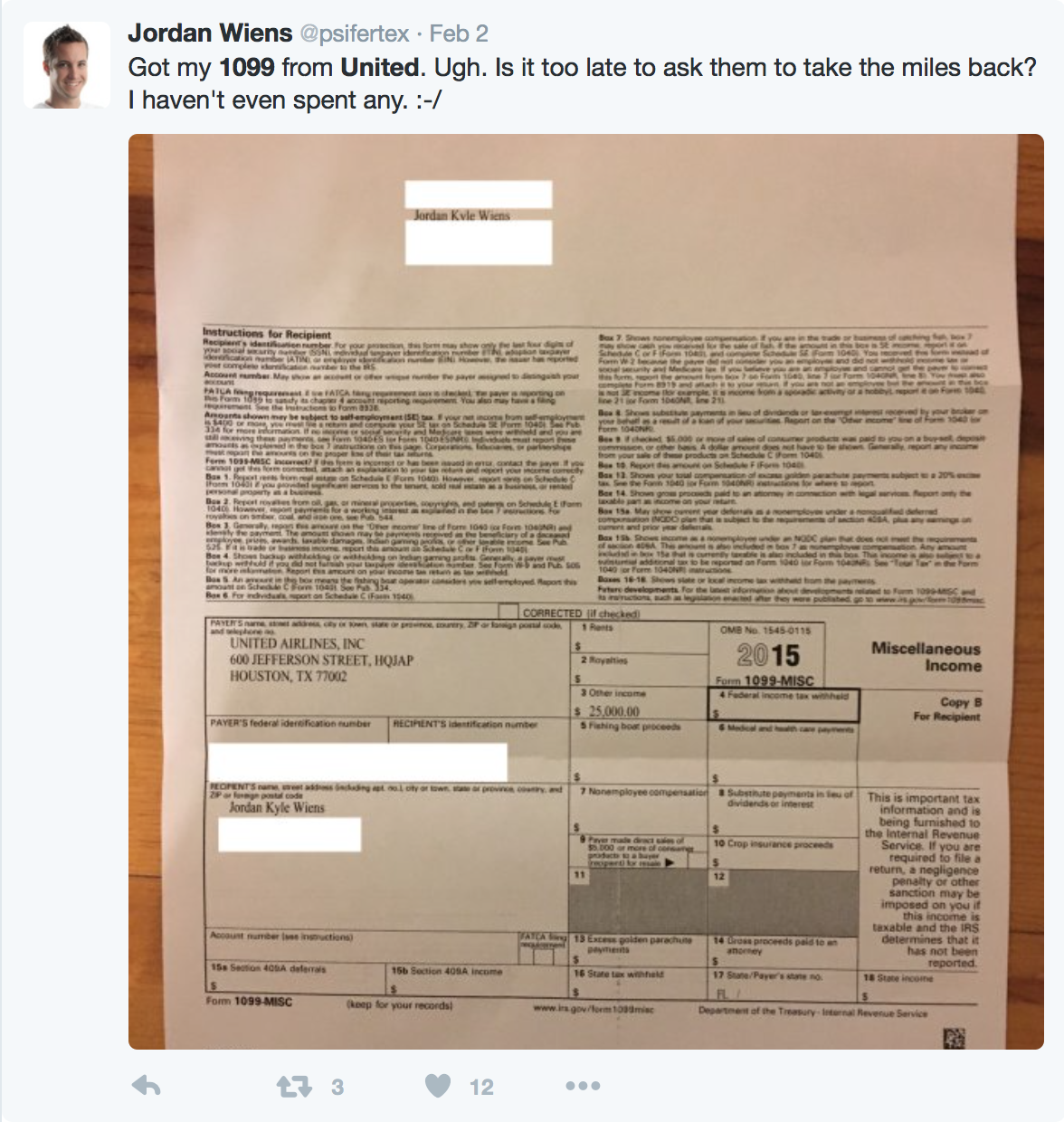 After digging through a bit in replies, it seems that the $25,000 value was for 1.25M miles rewarded to @psifertex. That means…..

So, United is valuing these miles at 2 cents/mile. This is not mentioned anywhere on United’s bug bounty program site and, only after some digging, was mentioned by a random blog called Dan’s Deals where he asked United what it would be valued at. Smart guy.

Zack is not a lawyer nor is he a CPA, and his statements should not be taken as legal nor tax advice. Don’t believe anything he says. You should consult your own accountant or tax attorney regarding your specific situations. Lawyered.

The Taxing of Miles

This is not the first case of people being taken off guard with a tax bill over the miles they recieved, but there is indeed a lot of precedent. Back in 2002, the IRS issued Announcement 2002-18, stating the following:

Emphasis mine. TL;DR: Reward and frequent flier miles are commonly considered tax free, but promo and payments in travel is not.

In 2009 and then 2012, Citibank took a firmer stance that miles that were earned as a sign-up “bonus” were taxable by sending 1099 to bank and card members. This issue finally came to a finalization in 2014 in SHANKAR AND TRIVEDI v. IRS COMMISSIONER. The taxpayers stated that the Citi “thank you” award miles shouldn’t have been counted as taxable and shoudl be treated as a rebate like other rewards. The IRS disagreed, and subsequently won. The value of those 50,000 miles was directly mapped to the actual cost of the ticket they purchased once they purchased it, which was $668. NOTE: This is ~1.33 cents a mile.

For contests/prizes however, miles awarded in this fashion have always been considered as taxable, and have been taxed at similar per-mile levels. If you take a look at one of United’s Million Mile contests they clearly spell out in the terms the Approximate Retail Value (ARV) and value the miles in that contest as 2.5 cents/mile. Same with another MileagePlus Shopping Contest at 2.5 cents/mile. American Airlines also values their miles at 2.5 cents/mile for conests as seen here.

So, if you’re getting miles as a reward for submitting a bug, you’re going to be taxed.

The “Value Of A Mile”

Is a mile worth 2.5 cents? 2 cents? Less than a penny? It depends… It’s time for a comparison. Here’s what things actually look like (note: travel geeks - it’s not exact, and there’s always outliers, but it’s close enough for gauging. Go back to FT ;) ).

Yes, there are numerous other examples where a mile is worth >2 cents in value, but it takes extensive planning and searching. So, in most cases that someone would actually be able to use the miles, the value of a mile is much less than 2 cents. This is where things are difficult. What is the actual value of a mile? The answer is always “it depends”. The answer in this case is “it’s for United to set and you to prove otherwise”.

It’s time to pay the taxmen with cold hard cash. (Note: I’m only focusing on the US here, because ‘MURICA and that I dont know different countries tax codes)

Obviously taxes vary based upon state and bracket, but the tax bill on a One Million Mile bounty valued at $20,000 in additional income will run someone between $5000 (Married in Nevada making <100k/year) up to just over $10,000 (California Making >300k/year)). Realistically, It’ll run most about $8000 in cold hard cash. At $8000, the cost per mile to break EVEN (that is not make anything of the disclosure) is .8 cents / mile. Go look up at that chart again. Now realize that at one million miles, even .1 cent (not 10 cents, a tenth of a cent) per mile equates to $1000 in claimed value.

Assuming the tax burden of $8000, If you were to redeem your miles for Amazon Gift Cards, you would loose $2000 to taxes for disclosing the bug. If you were to use TPG as your evaluation, after taxes you would essentially have $5,000 for the 1MM bug (vs $12,000 of post-tax value they claim it to be worth).

So What Can Bounty Hunters Do About This?

Well, it falls into two groups of things:

Got paid out and shocked by that 1099? Ouch. Well, you’re not alone. If you want some background on others who got hit with high tax bills that were out of wack valuations, check out this post on View From The Wing and the external links in that post.

First, consult a real accountant, but again, that’ll cost you. But don’t fuck around with this as you’ll definitely get audited if you don’t claim it.

Second, You may be able to dispute the value of the miles. Work with that accountant to do that.

You could also sit on the miles and pay the full tax bill if you’ve got the cash and either (a) get the appropriate value for those miles on specific cases it makes sense or (b) donate them this year and take that 20k as a write off for this year (but you’d still have to pay 2015 taxes on it most likely). Honestly, I doubt you’ll get appropriate value for the miles unless you want to go around the world in business 3 times.

You Submitted a Bug But Haven’t Been Paid Miles

You can either (a) take these miles, knowing the tax liabilities, or (b) donate the miles through United so there’s no tax liability (you boy scout you).

Me personally? I’ll be staying far away from it.

Should We Call “Bullshit”?

United did say in their terms “You are responsible for any tax implications that apply based on your country of residency and citizenship”. Is it a case that these Bounty Hunters were just not as well informed on tax code as they should be? Or is it shame on United for handling their bounty program this way?

Yup, grab your pitchforks and throw your Shmooballs. I’m calling bullshit, and there’s a few reasons:

Listen, I get the opposition to this:

What Should United Do?

Don’t talk about a problem if you don’t have a solution. I’ve got a few recommendations:

Will any of this change? Probably not. But consider a warning next time you go to submit a bug for someone who’s not paying in cash - whether it’s miles, points, free services, or new toys. You’ll be on the hook for a tax bill to be paid in cash. And if you’re accepting miles, better know what they’re actually worth (and how much work is needed to get value out of them).